As pointed out by Otto E. Rössler, to produce chaos, it is sufficient to combine an oscillator with a nonlinear switch. [1] Here the oscillator is a relaxation oscillator containing a storage element represented by a capacitor, which is charged gradually through a resistor from the voltage source, and then discharged rapidly through a ‘‘threshold” element, such as a neon lamp. This element has to have in fact two distinct thresholds, one for ignition, and another, lower the extinguishing voltage. When the decreasing voltage across the capacitor reaches the extinguishing level, the element switches off, and the capacitor starts charging again, repeating the cycle. Here the nonlinear switch is replaced with a threshold for the excitation of oscillations (the ignition threshold) and some lower parameter level for reducing the oscillations (the extinguishing threshold). [2] In this way, Sergey Kuznetsov, Alexander Kuznetsov and Natalyia Stankevich proposed such a three-dimensional system in the form of

this system produces a beautiful multi-folded toroidal chaos (Fig. 1). The Poincaré section (ÿ = 0) reveals the toroidal structure and numerous foldings. The route to chaos is clearly a Curry-Yorke scenario according to which the torus is progressively folded, thus switching from quasi-periodic behavior to toroidal chaos. [3] 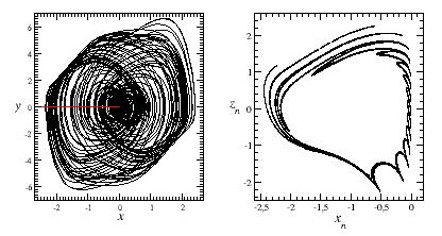 When parameter mu is decreased from a value greater than 1 for which the system produces a period-1 limit cycle, there is first a quasi-periodic regime. Many periodic windows are observed (Fig. 2). Progressively, the attractor approaches the rotation axis (the z-axis), some foldings occur, inducing chaos.

The synchronizability of this 3D toroidal oscillator was also investigated. [4]