Observability is an important concept (see here for understanding and interpreting results of several problems in nonlinear dynamics, such as analysis, synchronization, and control (see [1] [2] for instance). The reason for this is that the method’s performance and the reliability of the results depend on the “measured” variable. The "cord" system is of special interest for at least two reasons : i) It produces an attractor which is not equivalent to any known attractor, and ii) the system has two variables that provide poor observability of the dynamics.

. The good observability provided by the x-variable allowed us to perform a topological characterization of the cord attractor as detailed in [3].

. Parameter b is chosen as the bifurcation parameter. A bifurcation diagram (Fig. 1) reveals that one route to chaos for this system is the common period-doubling cascade. After the accumulation point, a chaotic regime is observed. Then, a long period-7 window is followed by a chaotic regime but there is no period-doubling cascade before returning to chaos. It seems that a boundary crisis thus takes place at the end of the period-7 window.

This attractor is well bounded during the first part of the bifurcation diagram as always observed after a period-doubling cascade. The attractor boundaries become not well defined in the right part of the bifurcation diagram - the tails of the probability density function of visits to the boundary region become evanescent - after a boundary crisis (

), leading to an attractor with over twice the size of the original one (Fig. 1).

Before the boundary crisis (beyond which it becomes nearly impossible to characterize the attractor due to its complexity), a typical chaotic attractor is shown in Fig. 2 for b=4.033. The main rotation is clearly seen in the y-z plane projection. 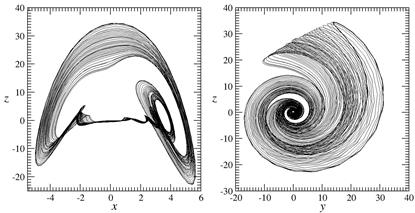 A first-return map to a Poincaré section is shown in Fig. 3. It is a smooth unimodal map as commonly induced by a period-doubling cascade. The decreasing branch is layered, a signature announcing the crisis observed for slightly greater b-value. 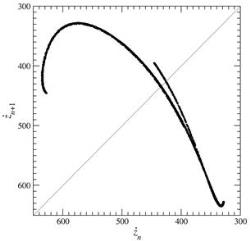 Fig. 3. First-return map to a Poincaré section of the cord attractor.

[1] C. Letellier, L. A. Aguirre & J. Maquet, How the choice of the observable may influence the analysis of non linear dynamical systems, Communications in Nonlinear Science and Numerical Simulation, 11 (5), 555-576, 2006.