A seasonal prevalence in plague epidemic broked out in India during the autumn of 1896 in Bombay. Oscillations with a 3-month period were observed during the same season of the year [1]. The original data were gathered every two months (see [1] and [2] with the exception of the first fifteen weeks (on point per week) [3]. The original data were processed to be provided (Fig. 1) with a sampling time equal to 1/16 month [4].

A second set of data are here provided. It corresponds to i) the numbers of human plague deaths per half-month, ii) the numbers of captured infected M. Decumanus, and iii) M. Rattus per half month, in Bombay from January 1907 to December 1911 [2]. Original data were processed to be provided (Fig. 2) with a sampling time equal to 1/8 month [4]. 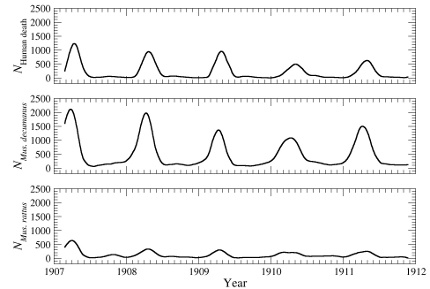 Fig. 2. Evolution of the interacting species from January 1907 to December 1911.

We here provide the data from which the low-dimensional chaotic models were obtained. If you want to use them, please quote [4].

Processed data as shown in Figs. 1 and 2.

Investigating these data set using a global modelling approach, that is, attempting to find a set of ordinary differential equations from experimental data [5], Sylvain Mangiarotti got few low dimensional chaotic models [4]. One of them, slightly modified, reads as

produces a chaotic attractor (Fig. 2) with

which are two parameters which are tuned to improve the "chaoticity" of the regime produced (this is a common procedure in global modelling [6]). In this model, x is the number of human plague death ; y and z are the numbers of captured infected rats M. decumanus and M. rattus, respectively. Note that to the best of our knowledge, this is the first multivariate chaotic global model obtained without any prior information on the model structure from experimental data. This model is very useful for investigating the nature of the coupling between humans and the two species of rats (see [4] for more details).

Fig. 2. Chaotic behavior produced by the global model obtained from the plague data.

[1] Indian Plague Commission, XXXI. On the seasonal prevalence of plague in India, Journal of Hygiene, 8, 266-301, 1908 - Reprinted in The advisory Committee, Reports on plague in India, Cambdrige University Press, 1911.

[3] J. K. Condon, The bombay plague : being a history of the progress of plague in the bombay presidency from September 1896 to June 1899, Appendix A : Northern Division, Education Society’s Steam Press, 1900.

Processed data as shown in Figs. 1 and 2.