1958 A simple model for the earth magnetic field

The paleomagnetic record contains evidence that the earth’s magnetic dipole has reversed its polarity many times in an irregular manner, and the paleomagnetic results indicate that, even while of one sign, its magnitude fluctuates. The reversals have occurred throughout the history of the earth, but during the last 70 million years they have been very frequent, taking place at least three or four times every million years (Fig. 1). As the earth’s magnetic field is caused by electrical currents generated within its deep interior, Edward Bullard (1907-1980) introduced a single self-excited disc dynamo as a possible analogy for the nonlinear mechanism responsible for the irregularity of the reversals [1]. But he found that reversals were not possible for such a system.

Fig. 1. Geomagnetic polarity for the Cenozoic period (present to 65 million years ago) and late Cretaceous periods.

In 1958, Tsuneji Rikitake (1921-2004) introduced the case of two identical coupled disc dynamos in which the current from each disc energizes the coil of the other. In such a case, the current can reverse its sign [2]. Rikitake’s model consists of two identical frictionless disc dynamos connected as shown in Fig. 2. The dynamos are driven by identical torques, G, to maintain their motion in the face of ohmic losses in the coils and discs. The discs of the model may be taken to represent two large eddies in the earth’s cores. The torques may be likened to buoyancy forces turning the eddies. The retention of resistive dissipation and the neglect of frictional forces reflect the probable dominance of ohmic diffusion over viscous diffusion in the earth’s core. Although these features of the Rikitake model replicate the earth faithfully, the model is crude in the sense of neglecting other features such as the diffusive and Alfvénic time delays in the communication between eddies in the core, as well as the effects of Coriolis forces. 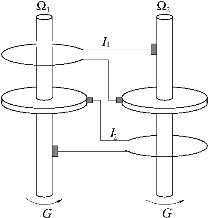 Rikitake’s model is the set of three ordinary differential equations

are two parameters. The system has two singular points of interest whose coordinates are

This system presents a rotation symmetry around the z-axis as also the Lorenz system has. For parameter values

and K = 1.5, there is a chaotic attractor (Fig. 3a) whose topology is equivalent to the Lorenz attractor ; one of such an evidence is, for instance, the first-return map to a Poincaré section is a typical Lorenz map (Fig. 3b). A quite complete analysis of the Rikitake model was perforned in 1970 [3] 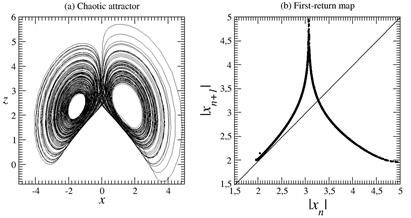 [2] T. Rikitake, Oscillations of a system of discs dynamos, Proceedings of the Cambridge Philosophical Society 54 89-105, 1958.