The Lorenz system was introduced by Edward Lorenz in 1963 when he was questioning the root of the difficulty to correctly predict the wheather. In order to check whether the model quality was involved or not, he used an extremely simplified description of a Rayleigh-Bénard convection as studied by one of his pupil, Barry Saltzman [1]. Lorenz thus obtained the set of three ordinary differential equations [2]

, the so-called Lorenz attractor is obtained (Fig. 1). An quite extended study of the parameter space was recently performed [3] 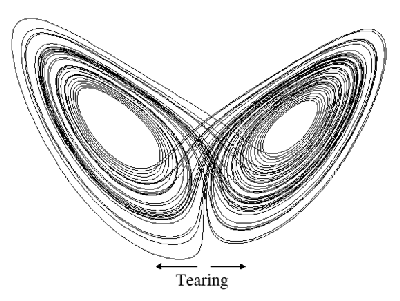 With this simple model, Lorenz understood that the origin of the lack of predictability of wheather events was inherent to the phenomena and was not resulting from the simplicity of the model. On December 29, 1972, Lorenz presented in a session devoted to the Global Atmospheric Research Program in Washington a text entitled

Predictability: Does the Flap of a Butterfly’s Wing in Brazil Set off a Tornado in Texas ?

Lorenz had sometimes used a sea gull as a symbol for sensitive dependence. But the swith to a butterfly, as Lorenz wrote in his book The Essence of Chaos [4], was actually made by the session convenor, the meteorologist Philip Merilees, who was unable to check with him when he had to sumit the program title. Lorenz partly answered the question as “over the years minuscule disturbances neither increase nor decrease the frequency of occurre,ce of various wheather events such as tornados; the most that they may do is to modify the sequence in which these events occur”.

First topological analysis of the Lorenz system was made by Robert Williams and J. S. Birman [5] [6]. They considered the periodic orbits embedded within the attractor as knots and built a “knot holded” that became a “template” in Gilmore’s works [7].

The spontaneous rotation of an insulating particle immersed in a low conducting liquid and submitted to a high dc electric field was observed as early as 1896 by Georg Hermann Quincke (1834-1924)  [10]. The mechanism involved is the following: During their migration from one electrode to the other, the free charges (ions) of the liquid accumulate at the surface of the particle, inducing a dipole moment P. If the charge relaxation time of the liquid is shorter than that of the solid, the direction of P is opposite to that of the field. Then, for a field intensity high enough, this configuration is unstable and the particle begins to rotate in order to flip the orientation of the induced dipole along the field direction. A noticeable property of the Quincke rotation is that the angular velocity does not depend on the particle size.

The rotor is a glass capillary tube (length L=5 cm, outer radius a=1 mm, inner radius b=0.5 mm) mounted on two needle points (Fig. 2). The cylinder is supported by a frame that contains two cavities in which the needle points fit. This mounting allows the cylinder to rotate almost freely around its axis with a very low precession. The rotor is immersed in transformer oil whose viscosity is h=14 mPa s and placed between two square stainless steel electrodes (4 cm long) separated by a 1 cm gap. 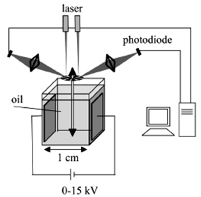 A first-return map to the maxima of the angular velocity of the rotor obtained by Peters and coworkers [10] presents the characteristic cusp of the Lorenz map (Fig. 3). 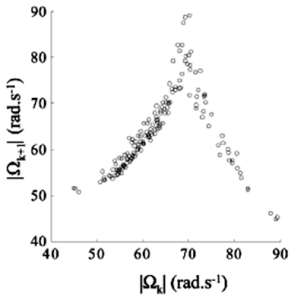 Fig. 3 : Experimental first-return map with a shape characteristic of the Lorenz map.