Taking Schwabe’s discovery seriously, Johann Rudolph Wolf (1816-1893), director of the Zurich Observatory, undertook a reconstruction of data before 1850 in order to verify, or test, Schwabe’s hypothesis. In order to normalize observations taken by different astronomers using a variety of techniques, Wolf introduced the relative number of sunspots at the solar surface:

is the number of individual sunspots,

is the number of groups of sunspots (which contain on average 10 sunspots), and

is a normalization constant (``fudge factor’’) that varies from one observer to another (by definition,

for Wolf’s observations). Sunspot groups were introduced because it is often difficult to resolve individual sunspots within a cluster of sunspots. Wolf succeeded in reconstructing a relatively believable variation in the number of sunspots back to 1755. The cycle that developed between 1755-1766 is taken by convention as ``cycle

’’, the others are counted from there. Cycle

In 1908 George Ellery Hale (1868-1938), of the Mount Wilson Observatory in California, discovered that sunspots were the sites of intense magnetic fields and measured the field strengths with a spectrograph of his own invention [2]: the magnetic field was detected by the doubling and tripling (splitting) of rare spectral lines (Zeeman effect). These strong fields are considered to be responsible for the suppression of convective motion. There is a strong correlation between the number of sunspots and solar activity. Thus, minimum activity is associated with an absence of sunspots: movements are not sufficiently violent to produce magnetic fields strong enough to block convective motion. Maximum activity produces numerous convective blockages and, as a result, a large number of sunspots.

Another discovery by Hale and his co-workers is that there is a reversal every other cycle [3]: ``After the sun-spot minimum, which occurred in December 1912, we found, to our surprise, that the polarity of the members of bipolar groups was opposite to that observed before the minimum. This sudden change was so remarkable that it was feared some observational error had been made. The results have been checked repeatedly by different observers, however, and in all cases the conclusion had been the same.’’ This means that we need an order-2 symmetry to take into account this reversal. In this case the square of the symmetry operator has to be equal to the identity matrix. When inverted, it can then be used to obtain a cover, that is, a phase portrait with a rotation

symmetry. The rotation symmetry takes into account the inversion of the magnetic field at each solar cycle. When the coordinate transformation

is used, the singularity around which the symmetry is organized is implicitly located at the origin of the phase space. This means that we would introduce a symmetry with respect to the origin of the phase space. This is what Bracewell did by introducing a sign change at each minimum of the sunspot cycles [4]. This is not the only possibility [5]. In fact, covering the sunspot data as Bracewell suggested must lead to two disconneted attractors (Fig. 2). To joint them, some discontinuities were introduced by hand. This explains why no global model were obtained from the Bracewell index. 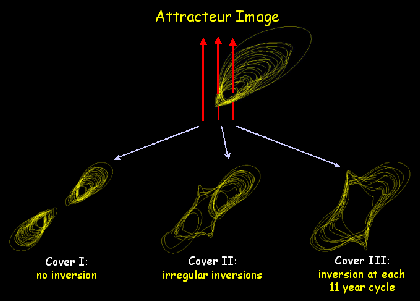 by using the map

defines the position of the singularity in the phase space reconstructed from the sunspot numbers. There are three possibilities. In the present case, it was shown that

was a suitable choice [6]. The data here available are produce from the monthly averaged sunspot number (available on line). The covered data (Fig. 3) can be downloaded from this webpage. Do not forget that the sunspot numbers are not reliable before 1850 since reconstructed by hand by Rudolf Wolf from old observations.

on January-February 2021) ! You can compare our predictions with those available today on the market on this site.

[1] The data here used can be downloaded from Nasa.