To overcome the complexity of the Hodgkin-Huxley model [1], Richard FitzHugh introduced a second-order differential equations which appears to be too simplified [2]. Then James Hindmarsh and Malcom Rose added a third equation to limit the neuron firing and got the model  [3]

where x is the membrane potential, y the recovery variable (quantifying the transport of sodium and potassium through fast ion channels) and z an adaptation current which gradually hyperpolarizes the cell (it corresponds to the transport of other ions through slow channels). For appropriate parameter values, the Hindmarsh-Rose system produces a chaotic attractor (Fig. 1a) characterized by a first-return map to the Poincaré section

which is smooth and unimodal (Fig. 1b). This behavior is obtained after a period-doubling cascade when the applied current I is decreased. The parameter values used for producing this chaotic attractor are a=1, b=3, c=1, d=5, r=0.001, s=4, 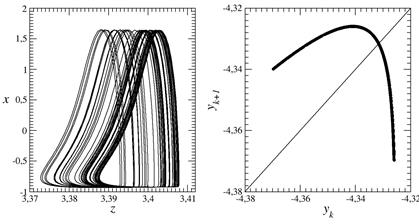