-Globulin] and defended at the University of Tübingen.

1969 Professor for Theoretical Biochemistry at the University of Tübingen.

1994 Professor of Chemistry by decree.

Endophysics: The world as an interface, World Scientific Pub Co, 1992.

Chaos: The World of Nonperiodic Oscillations written in the early 1980s and published on May 20, 2020 for his 80th birthday]

My life in chaos

In 1953, at age 13, I was influenced by Abbé Chaisnot in Granville. When I was 17, I got my radio amateur’s licence (DR9KF). My decision to study medicine was ethically motivated, as a substitute for becoming a monk, and rewarded by my discovering Bertalanffy and later Teilhard de Chardin. Erich Letterer, my Ph’D adviser in pathology, with whom I had rediscovered immunological tolerance, had little patience with my experimental skill (the thesis had only 24 pages).

An idea I had had at age 22 on chemical evolution opened doors when I mentioned it in letters to Carl Friedrich von Weizsächer and Konrad Lorenz who became my second mentor. Deductive biology (a predictive approach to behavior and the brain) formed the topics of discussions. From Otto Köhler, whom I never met, I learned about the infant’s smile (I made a type copy of his paper). Bathing a baby once had been part of the pediatric curriculum. The next great influence was and is Reimara Waible who underserved by made me her husband. She opened the door to America’s Center for Theoretical Biology. Bob Rosen gave me the manuscript of his Dynamical System Theory in Biology (Wiley, 1970) in 1969, an eye-opener and still very useful in its Poincaréan and Thomian spirit. So I became a member of the Rashevsky school, because Rosen loved his mentor so much. I met Bertalanffy (who invited us for Christmas) in Buffalo. R. W. Kaplan and U. Franck enabled my coming to Germany by getting stipends for Tübingen where I could habilitate in 1973 in Theoretical Biochemistry which suddenly gave me an identity and three years later a tenured docendship. The Center in Buffalo, unfortunately, dismantled because it allegedly had ``no tangible results’’.

Wolfgang Engelmann in Tübingen brought me in contact with Art Winfree who helped spawn the liquid digital computers. Michael and Debbie Conrad who were at Tübingen at the time helped publish this work. Fritz Horn in Rochester also became a friend and Okan Gurel, White Plains, and Hans Degn and Lars-Folke Olsen in Odense and Dick Noyes, Oregon. I remember meeting Britten Chance and Benno Hess, Evgeny Sel’kov and Anatoly Zhabotinsky. Okan and Desnet, his chemist wife, brought us to Kyoto in 1975 where we met Anatol Rapoport and Masaya Yamaguti, who had graduated from a Zen master rather than a state school to become the weightless personality to anyone he interacted with - a holy man in mathematics. In the same year, Reimara and I were received and ravishly served as friends by Gregory Bateson in Santa Cruz to discuss the theory of the simle. Bateson was ``not jealous’’ of his friend Konrad’s Nobel.

In the early 1970’s the first contacts with Steve Smale,Ilya Prigogine and Ralph Abraham were fostered. The year 1975 also brought Art Winfree’s unheard-of present about ten unpublished and published papers he had collected over the years on chaos - to encourage me in my search for a knotted oscillation. Later I learned that Stanislaw Ulam (whom I briefly met in 1983) had had a similar idea. Art was one of those giving person whom you can never pay back in a lifetime. My school friend Roland Wais and later my friend Peter Weibel, pupil of Gödel’s, and Mohamed El Nashie, René Thomas and George Lasker are in the same category of being permanent givers. So in Jack Hudson, the colleague who had the most good influences on our lives. The chaotic attractors of 1975 onwards owe their existence to Art Winfree’s having shared with me his obsession (as in Spielberg’s movie Close encounter of the third kind) with a three-dimensional puzzle. 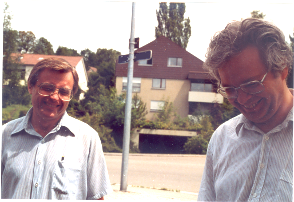 Otto and Jack in Tübingen in the 1980s

Okan’s 1977 conference of the New York Academy of Sciences, to which he invited me as a co-organizer was an incredible gift. Eberhard Hopf came, Benoît Mandelbrot of fracal fame, Bob May, the magicean, whom I secretely hold responsible for the chaos success, Jim Yorke, Bob Williams. The ``sound of chaos’’ and ``screw chaos’’ were greated with joy. It was Jimmy Carter time: everyone was wearing a pullover (sweater). Theo Parlidis and Peter Decker were also there. So was Rolf Landauer who invited us to his home. 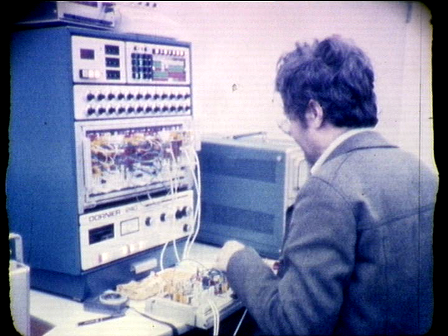 Otto in the front of his analog computer (1979)

In 1979, I caught the hyperchaos fever in the (presumably false) assumption that the ``worst’’ or most beautiful complexity in four dimesions had been found. Gerald Baier and Sven Sable since extended it to arbitrarily high dimension - with still a single nonlinear term sufficing. It is probably a good idea if I slop here since the harnessing of chaos (the title of a Toyota Conference 14 years later) was the main topic up to this point. This almost finishes my life in chaos.

A review on the first chaotic system published by Otto Rössler in 1976 can be found in [1] here.

- On May 20, 2020, we celebrated the 80th birthday of Otto. A small report of this event by Sylvain Mangiarotti can be found here

A six-minute, super-8 sound film, demonstrating the different behavioral modes and their bifurcations in the 2 equations has been prepared. Chaos sounds as musical as a snore.