In the 1970’s, chemical oscillations were good candidates for chaotic behaviors. John Hudson’s group was the first to publish a convincing evidence that the Belousov-Zhabotinski reaction can produces such a behavior [1]. In the 1990’s this group was working with electrodissolution. The data here provided are one of these numerous beautiful data they collected.

Chaotic behavior are also found in electrolytic reactions. Electrolysis is an electrochemical reaction that occurs between two electrodes in a cell. A total chemical reaction appears in this cell that is the sum of two independent chemical reactions that occur at the two electrodes: they both involve the transfer of electrons across a metal/solution interface and adsorption/desorption of matter at the electrode surface. Usually only one of these reaction is of interest: the corresponding electrode is called the work electrode and the other electrode is held at constant composition. The two potentials are usually measured with respect to a reference electrode. Since the reference electrode has a constant composition, its potential is constant. As a result, all potential variations that occur in the cell are due to the working electrode. 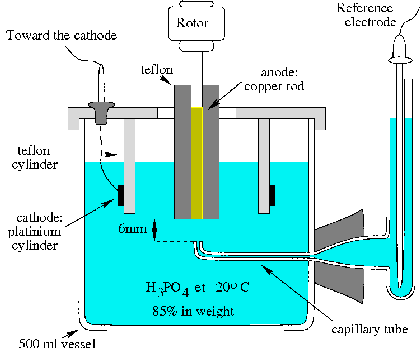 Copper electrodissolution in a solution of phosphoric acid (H3PO4) was studied by John Hudson’s group at the University of Virginia in the United States  [2]. A copper cylinder 8.26 mm in diameter inserted in a teflon cylinder 2 cm in diameter is rotated at a moderate speed (

700 rotations/minute) in an 85% (by mass) solution of phosphoric acid maintained at 20°C by a heat bath (Fig. 1) the rotation speed must be low enough to avoid creating turbulence but high enough to avoid reactants migrating too far. [3]. All these precautions are needed in order to get sufficiently accurate measurements of the time evolution of the current

. The data set provided here courtesy of John Hudson was recorded by Zihao Fei during his Ph’D. For any additional information about it, please contact John Hudson.

When they measured the current across the anode, John Hudson and Zihao Fei observed relatively large oscillations that could reach amplitudes as large as 15 mA while the average current was 40 mA (Fig. 2). These oscillations have an irregular amplitude while their period is relatively constant.

Fig. 2: Time series of the current

From these data, a global model made of three ordinary differential equations was obtained [4] and a topological characterization performed [5].